The Last Month+ of BobaBoard

Filed in: Keeping up with Ms. Boba

(Ms. Boba voice) This edition of our summary is brought to you by my amazing "volunteer assistant" Michelle.

Hello, BobaBoard community! My name’s Michelle, and I’m helping Ms. Boba as a volunteer assistant. While much of this work is at a too early stage to dive deep into—bummer!—let's just say: it involves building up BobaBoard as an organization, and figuring out its structure and processes.
I also did a lot of writing for this summary, and I’ll continue to ghost write, research, and support Ms. Boba until she manages to clone herself and can run BobaBoard on her own. Until then, I’ll be here lurking in the shadows.

Our main focus area is building a sustainable environment for volunteers by, among other things, delineating the fundamentals of good documentation, defining the onboarding process for new folks, and building up processes and tools to match each volunteers to the project that best matches their skills, interests, and availability. As part of this, we’re reaching out to seasoned volunteers from various startups, nonprofits and fandom-orientated projects to talk about how their volunteering programs work (or don't!).

As part of this, we realized that a fundamental part of creating a functional volunteers environment is writing down everything we know/decide about ongoing projects*, so that if a volunteer needs to drop out the next person can pick up right where they left off, and so there's a (electronic) paper trail of the choices made. Here are some example from this month:

When creating a new thread or adding a comment or contribution to a post, you can’t poke around the current page without either deleting what you wrote or sending the comment. To solve this, we’re redesigning the editor, making it possible to minimize it, move around the page, and pick up right where you left off. 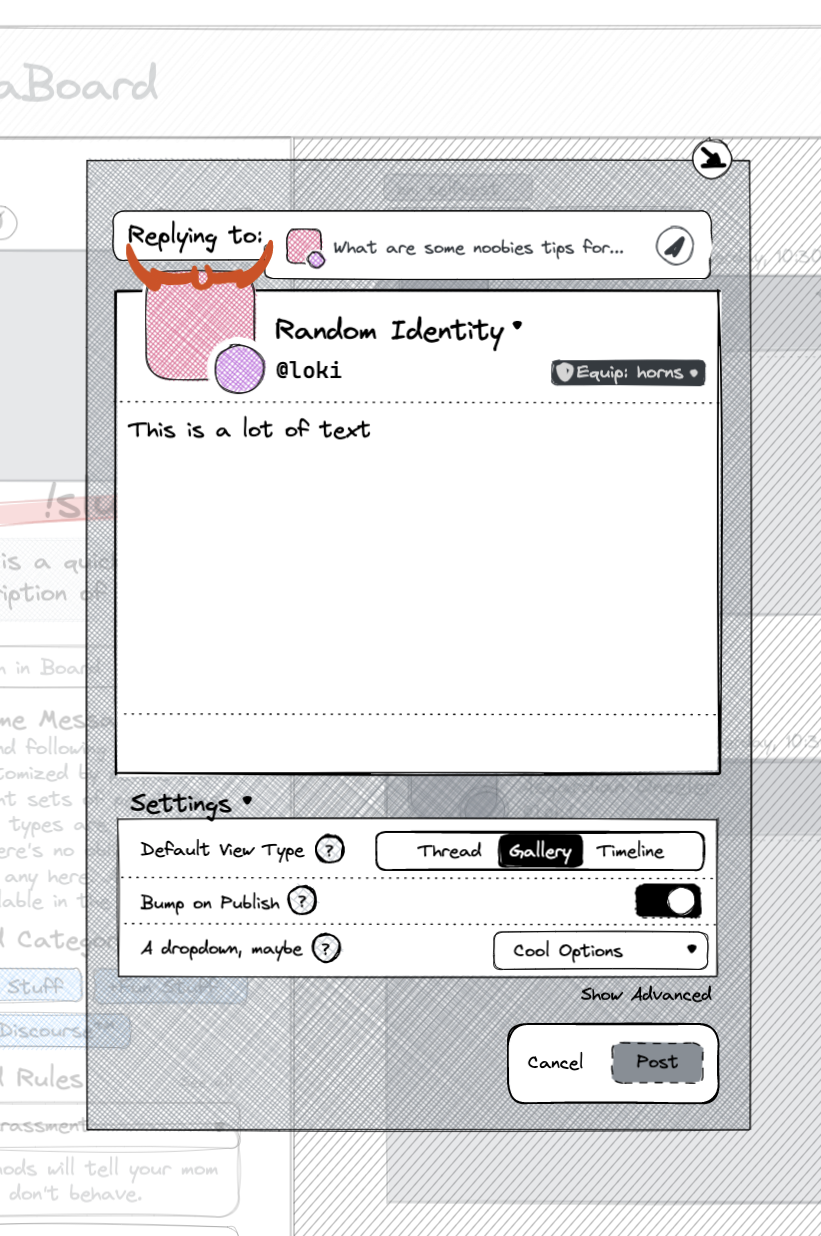 [Volunteer Shoutout] Thank you to one of our wilfully anonymous volunteers for the revamped "block editor" design (seen above). Thank you so much, secret designer!

Our current GIF search interface leverages a non-BobaBoard library, making its logic and look different from the rest of the website. To solve this, we’re looking to expand our dropdown menus code to include the ability to select between image. Internal details about our current authentication mechanism are leaking into some of our database queries. Trust us: this is bad. Here’s a—not taken!—project tackling this issue, while also making the queries less cumbersome and repetitive.

There's still a lot of work to be done to effectively manage volunteers and create a smooth process and experience, so expect to hear a lot about it in the following months!

One of Ms. Boba most daunting-yet-necessary tasks at the moment has been standardizing and documenting BobaBoard’s REST API. For the uninitiated, an API is the contract through which clients communicate with the server, while REST is one of the golden standards for API definition https://en.wikipedia.org/wiki/Representational_state_transfer.

“The REST architectural style emphasises the scalability of interactions between components, uniform interfaces, independent deployment of components, and the creation of a layered architecture to facilitate caching components to reduce user-perceived latency, enforce security, and encapsulate legacy systems”.

Standardizing this API means people who are not Ms. Boba can make choices that are consistent with her own, and helps create a codebase that's easier to understand, modify and expand. As you can image, this significantly ties into the volunteering focus area described above.

As part of this effort, we've spent time adding a whole pipeline to make creating API documentation as seamless as possible. This means that when we make changes to BobaBoard’s API, our work-in-progress documentation website automatically displays the latest documentation for everyone to peruse. In time, this will allow us to catch any mistakes that get our expectations out of sync with what’s actually happening, and get volunteers up to speed quickly and safely.

Ms. Boba wrote an article on some of the work done, though the functionality is rapidly expanding to include even more bells and whistles like automatic validation and testing.

Since observability is a complicated concept (you can read more about it in this article), let's focus on a summary of its main benefit:

The overarching benefit of observability is that with all other things being equal, a more observable system is easier to understand (in general and in great detail), easier to monitor, easier and safer to update with new code, and easier to repair than a less observable system.

Keeping it very simple, observability means you can keep track of the internal state of the system so that, when errors happen, you can figure out what’s going on without tearing your hair out.

This month we started using honeycomb.io to discover errors in BobaBoard's server logic. It already allowed Ms. Boba to figure out some of them were—maybe unsurprisingly—coming from Tumblr's mishandling of some embed requests. Oh, Tumblr.

Aside from all this theoretical work, the practical one has been revamping a lot of how the server works (which also impacted the client, of course). As an example, the notifications delivery architecture has been completely rewritten from scratch so it doesn’t make Ms. Boba feel gross when she looks at it.

Much of this is working toward the launch of Realms, and is vital to it: without laying this solid foundation, Realms cannot happen or, at the very least, will make writing new functionality harder and harder with time.

[Volunteer Shoutout] For this work, we would like to give a shout out to our volunteer Sel who has been a great help in the board UUID migration. This is something we really can’t do Realms without! Thank you so much, Sel!

We’ve been working on creating some premade UI mocks to help us iterate faster when making design changes, and get earlier feedback. For example, here's how we used our "board page" mocks to visualize how the sidebar might look in the future, including an exploration of potential new sections. 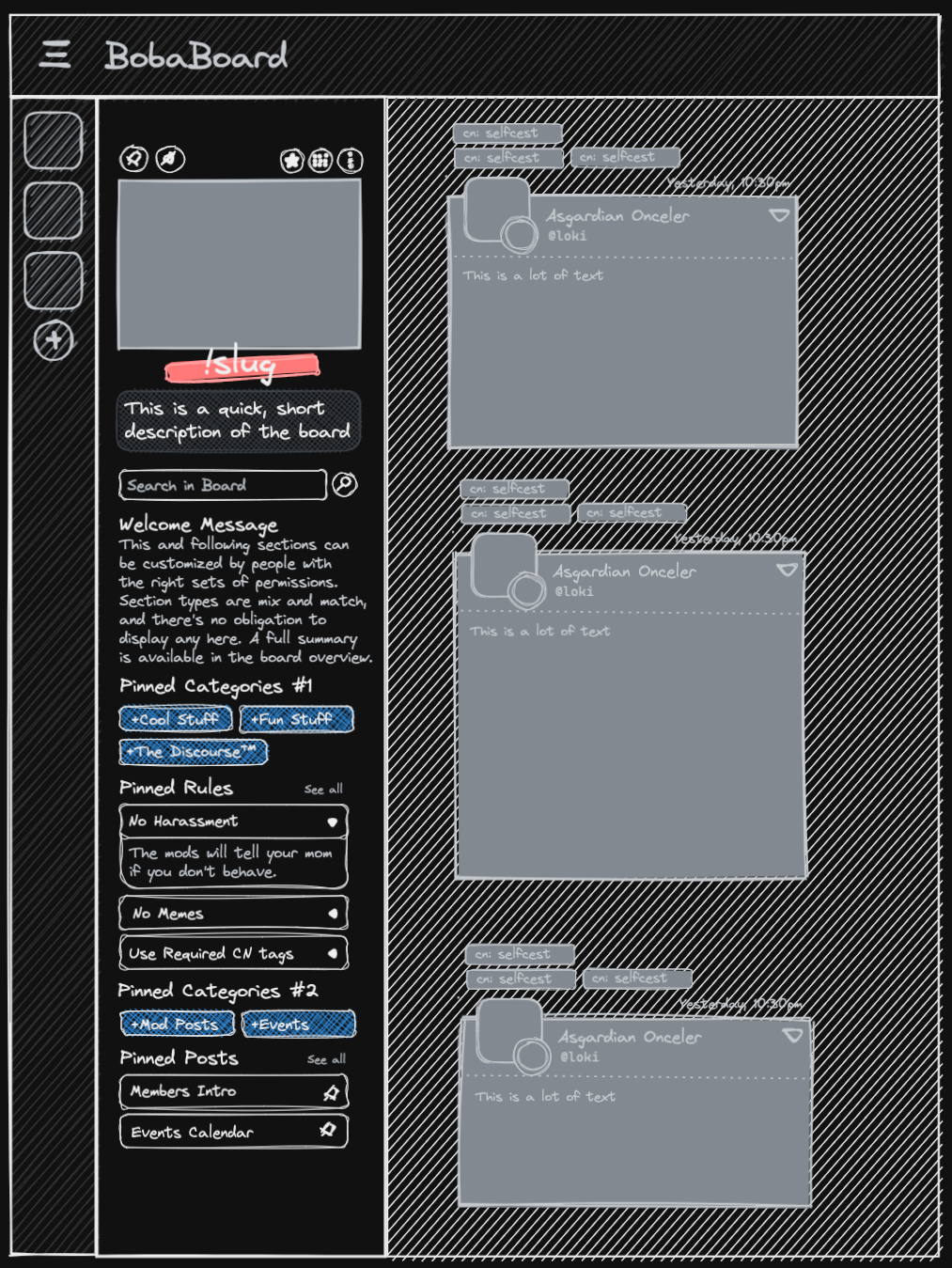 Of course, none of this is finalized! As said above, these are simply drawings we’ll use in the future to gather feedback earlier in the process, or brainstorm potential changes/ideas.

We’re also working on more high-end mocks, but we’re not ready to share the links yet.

...and this is all for this month! As usual, let us know what you think (and what you want to see more of) in the feedback form!

And if you want to support BobaBoard, you can subscribe to the paid edition of this newsletter for only $5/month! Not ready to commit? What about some custom merchandise or even a whole ship?

Your contribution will go directly to BobaBoard's development.

Tired of outdated memes and questionable humor? Never fear! Just opt out of the newsletter from the members area, and read at your own leisure.

← What Indie Startups and Content Creation have in Common (and why you should care)
Getting Things Started →
Subscribe
You've successfully subscribed to BobaBoard Insider — Ms. Boba's Not-So-Secret Journal
Welcome! You are now a BobaBoard Insider — Ms. Boba's Not-So-Secret Journal subscriber.
Welcome back! You've successfully signed in.
Success! You are now a paying member and have access to all content.